There was one clear contrast between the Newcastle and Wolverhampton games, which revealed the difference between a 1-0 defeat and a 2-0 win. That contrast was Cesc Fabregas.

Fabregas had one of his worst ever performances in an Arsenal shirt against a determined Newcastle side on Sunday, and that game ended in defeat. Of course there are more factors than just Cesc, but his performances are a fascinating strand of this story.

Against Newcastle Cesc misplaced almost 27% of his passes during the game, and this epitomised the way Arsenal played as a team on the day. In the end the team found little rhythm or flow, and were beaten deservedly.

At the time I compared Fabregas to Cheik Tiote, the talented Ivory Coast midfielder, on Guardian Chalkboards and Fabregas’ poor display was starkly revealed. Tiote only misplaced one pass, and has been one of the standout performers for this Newcastle side. 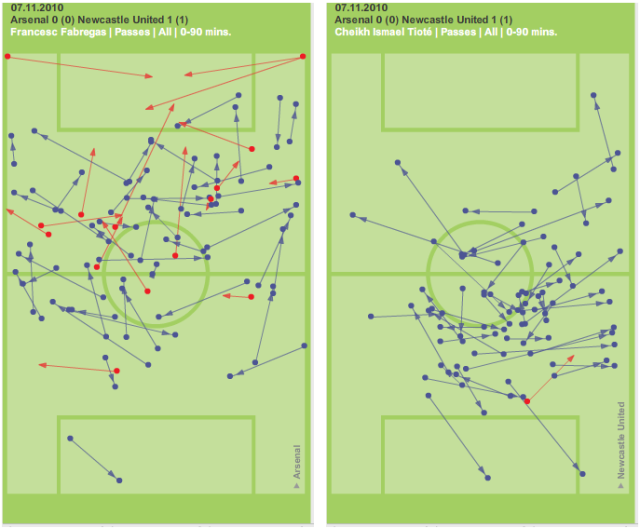 A midweek game at Wolves presented a different challenge, no less difficult, and it was another shaky display. However, although Fabregas used the ball less here, he readjusted his play and misplaced only 8% of his 38 pass attempts.

This is the difference between a defeat and scraping a win. Not only that but Fabregas provided an assist too; 50% of the goals on the night.

Everyone knows how crucial Fabregas is to the Arsenal side; his passing can pull the team through games. Against Newcastle none of the side played well, but an in-form Fabregas could have pulled something out of nothing. As it was the poor passing meant Arsenal never found that flow, which would normally be dictated by Fabregas at the heart of midfield.

Fabregas’ drive is clear, as early as 2007 he told the Guardian:

“We get upset with each other when we don’t do things properly and you need this passion, this desire to win things…every training session I get angry because I think I didn’t do well.”¹

This perfectionism resulted in a much improved display against Wolves. Reducing his mistakes from 27% to 8% is a pretty clear signal.

No matter how shaky the win, three points and a clean sheet away from home are not to be taken lightly. Arsenal now look to Everton on Sunday to build on their form.

Analysis of Walcott, Arshavin and more in Player Scouting.